It's National Pizza Month and to celebrate that, we wanted to know what each states favorite pizza topping is. When it comes to the Quad Cities, it depends on what side of the river you are on.

To find out what each states favorite pizza topping is, we turn to our friends at Zippia. They looked at Yelp, and tracked the amount of nationwide pizza orders placed on Yelp and Eat24. They then filtered the orders by state to figure out which topping was each states favorite.

According to Zippia, 29 states said that their favorite topping is cheese. I know a lot of people, including myself, who would argue that cheese really isn't a topping. I mean there is always cheese on pizza, unless you are lactose intolerant. But to just order cheese pizza? That's like getting a hamburger with literally just the bun.

They found that Domino’s, Pizza Hut, and Little Caesar’s (in that order) have the most pizza sales. Zippia also found that the pizza delivery driver only makes $9.95 an hour and drives 75 to 100 miles a shift.

Zippia also wanted to find out which states had the most pizza places. To do that, they turned to PMQ Magazine for data on pizza restaurants per capita. Zippia assumed that the more pizza places per captia, the more pizza lovers there were in the state.

This is what Zippia found: 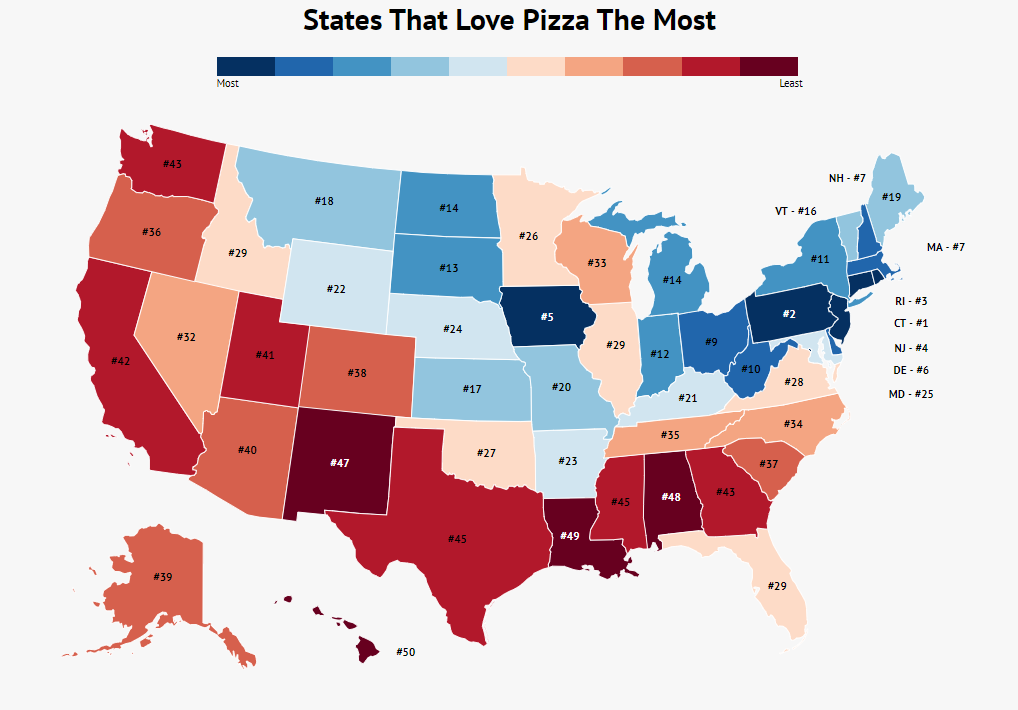 Zippia found that Illinois only has 2 pizza joints per capita. This landed them at #29. Iowa on the other hand lands pretty high on this list. Iowa has 3 pizza places per capita and landed at #5 on their list. There is a lot of pizza lovers in Iowa!

Filed Under: cheese, illinois, Iowa, national pizza month, pizza, taco, toppings
Categories: Articles, News, Original Features, Quad Cities News
Comments
Leave A Comment
Hy-Vee Deploys Disaster Relief Fleet To Florida With 1 Million Meals
Top 10 Places To Get Coffee In The Quad Cities
Illinois’ In The Top 10 States Where People Are Quitting The Least
Monica Austin To Headline The Midwest CMO Fall Tour In Iowa This Year
Iowa, If Your House Smells Like Ammonia, Get Out Immediately
Bridge Hit 41 Times In 2 Years, Are Illinois Drivers That Bad?
Illinois Red Cross Volunteer Going To Florida To Help With Hurricane Relief Efforts
This Is The Pumpkin Capital Of Iowa
Iowa’s Case Of ‘Brain Drain’ Among The Worst in The Nation