Mmmmmm... bacon. You can already smell this article, can't you? No matter what time you're reading this, your mouth is watering because you're thinking of bacon. I know, it's going to be hard for me to get through this.

While most of us (should be all of us) love bacon, there are some people who do not. As a matter of fact, there is enough people who don't like bacon where we can tell which states love and hate bacon the most.

To find out which states love some good greasy bacon and those who don't, we turn to our friends over at Zippia to give us those answers. Zippia used data from Ginnys.com, who measures bacon-loving by analyzing 64,000 Instagram photos. That's a lot of Instagram scrolling.

The photos Ginny's looked at were throughout the U.S. and tagged with #food, #breakfast, #lunch and #dinner. The more of those pictures contained bacon, the more bacon-loving the state. From there, Zippia used their data to rank each state. The more bacon loving posts, the higher the state-ranked.

Zippia  found that Iowa ranked as the 3rd most bacon-loving state. 83% of Iowans love bacon, which to me seems kind of low for Iowa.

Illinois is pretty far down the list. Zippia found that Illinois is the 34th most bacon-loving state, and only 12% of Illinoisans love bacon.

These are the top 10 states who love bacon:

Zippia also found these fun facts in their research:

See where other states ranked on the map below: 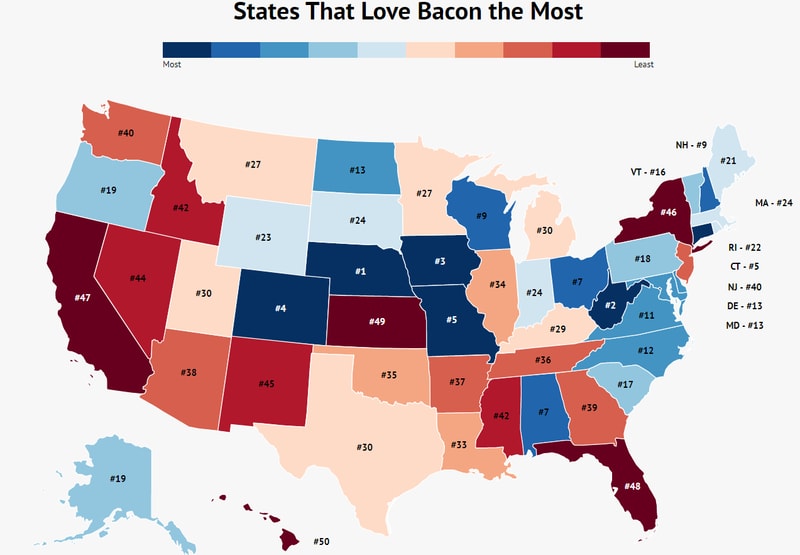 Filed Under: Bacon, delicious, food, grease, survey, yum, zippia
Categories: Articles, News, Quad Cities News
Comments
Leave A Comment
Día de los Muertos Food Truck Party Happening At Vibrant Arena
This Illinois Donut Shop Is The Last Of It’s Kind In All Of America
Why An Illinois Steak ‘n Shake Is Being Guarded By Police
Surprisingly, Iowa Is NOT One of the Hardest Working States In America
Take Part In Wild Rose Wine Fest Before Heading To Bacon & Brew Fest
Aw Shucks! Shuckfest 2022 Happens In Morrison, IL July 30th
Free Beer Samples And $2 Bacon-Inspired Bites In Clinton This Fall
Learn How To Eat And Cook Healthy Foods This Month With Hy-Vee
This Awesome Quad Cities Group Is Working To Make Sure Food Doesn’t Get Wasted